Five little kittens, all in a row

A dramatic day, kittens, and an X-ray

Okay, where to begin?

Today was the day we had a visit to the vet scheduled to get X-rays taken of Tribble and Lola to find out how many kittens they’re going to have. Tribble is due July 28th and Lola is due August 1st.  Except when Marie went to put Tribble in the carrier she found her in the corner… and Tribble had just given birth to her first kitten of this litter.  Ten days early.

Not good. Over the course of the day Tribble gave birth to six kittens  (two stillborn and four live). Two of the live ones were born at the vet when we took her there for an X-ray. She she hadn’t given birth for a few hours and we wanted to make sure there weren’t any more left to go. Sure enough there were two more inside and after a shot of Oxycontin she gave birth to them.

That said, Tribble is not  being a good mother. We are doing our best to keep the kittens fed and warm, because Tribble is basically ignoring them.  We aren’t sure if the four will survive. Because of this we aren’t going to take deposits on these kittens just yet.

Meanwhile, we also took Lola in for her X-ray, and that big, round ball of a girl is expecting seven! Seriously, she looks like she swallowed a beach ball. We are accepting deposits on these kittens from approved applicants.

Inside the spherical cat

Update 7/21: All of Lola’s kittens are reserved.  Unfortunately, two of Tribble’s preemies have passed. The other two are hanging in there. Tribble is making some effort to stay near them and clean them a bit, but is still confused about nursing them. We continue to feed and toilet them on our own every two hours. The two remaining kittens are eating pretty well but are not particularly squirmy or energetic relative to full-term babies. We are making every effort to save them but at the same time we’re trying not to be too optimistic.

Update 7/25: The last of Tribble’s preemies died today. The last boy died on Monday, and the last girl died early this morning. On her own and now in our new incubator she seemed to rally. She had gotten more of an an appetite, had started to gain weight, and was doing more than just sleep. We started to think that she was really going to make it, but in the last 24 hours she started to fade. We sensed where it was going but were helpless to stop it.

Tribble is doing fine. In a few weeks we will have her spayed and a few weeks after that we’ll hopefully find her a forever home. In the meantime, Lola looks ready to pop, Queen Sara might be pregnant, and Starry is next up in the fantasy suite. Moving forward.

Thank you for your kind words and support during all of this. We understood that it was unlikely that any of these preemies would survive but we would be kicking ourselves if we didn’t make every effort to give them a chance. 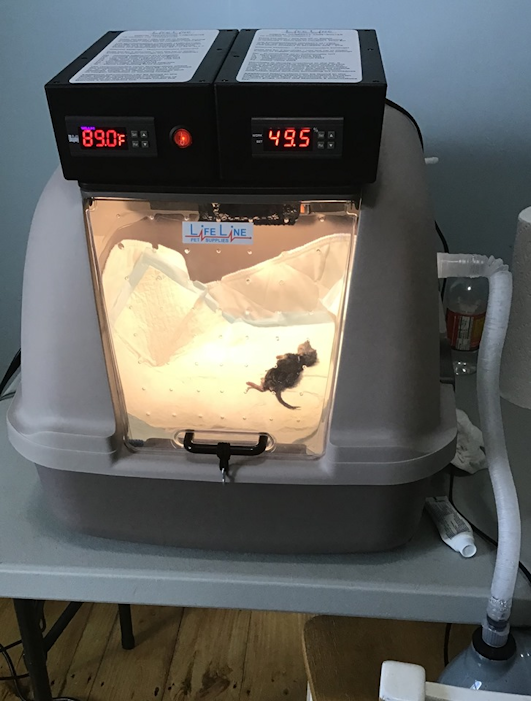 When she was still alive

Permanent link to this article: http://atlastcats.com/a-dramatic-day-kittens-and-an-x-ray/