Tiger Lily gave birth to three kittens on November 12th (two days early). All are doing well and starting to walk. The last kitten (“Tiny”) was very small and we weren’t sure if she was going to make it, but between supplementing her diet with formula and an attentive mama, she is thriving, if not as big as her two older brothers just yet.

All of these kittens are available and we will be contacting people with approved applications. Since Tiny was born so small we are going to hold off on taking a deposit on her for a few weeks to be sure she is developing normally. 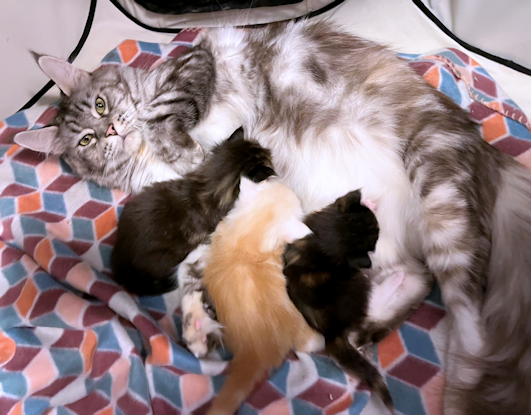 Lily was consistent with her behavior last year, in which she refused to use the litter box after her kittens were born. And we don’t mean that she went outside the litter box. She just held it all in, and needed trips to the vet to have her bladder expressed and such. Luckily, we figured out that if we put her in a carrier with a litter box she would do her thing within a couple of miles. Yes, she’s a weirdo. We’re not sure if it was the motion of the car or being away from the kittens that made her feel like it was okay to go, but we’re glad we figured it our because it’s a lot cheaper than a trip to the vet.

Anyway, she did the same thing this year, so we just started taking her for quick daily car trips so she could relieve herself, dubbing the car the Pooper Uber. She just started using the box in her room today (similar to last year, about when the kittens started walking) so hopefully that’s the end of it.

Permanent link to this article: http://atlastcats.com/early-as-usual/