Seven for Lily in the wee hours 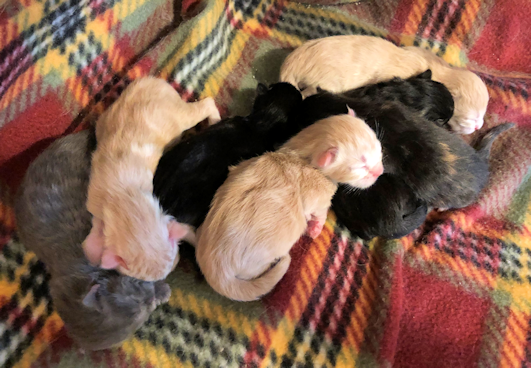 All of these kittens are reserved,

Lily gave birth to seven beautiful kittens starting around 1:00AM and delivering a kitten every twenty to thirty minutes afterward with no issues. That isn’t to say that there wasn’t any drama, as Lily didn’t want to get into the nest, kept trying to wiggle off of the birthing pads, and so on. Maybe it was first litter jitters, but she was a handful. Her kittens came out almost like clockwork, though!

Since Lily had no interest in the nest we were pretty certain she’d move the kittens under the bed, so we did some  quick rearranging and moved Pixel and her kittens (who are doing great) to a different room and moved Lily and her kids into the kitten room.  What is they say in the Army? We vacuum and Swiffer more floors before 6AM than most people do in a day. Or something like that.

As usual, we put Lily and the kittens in the nest but we know the game and placed fleece strategically around the room. Sure enough, she picked the one under the old radio cabinet. (What is it about that spot? Maybe because it is furthest from the windows it seems safest?).

The kittens are all nursing and active, despite being a little on the small side. At this point we’re used to kittens being late and chunky when they come out, like Pixel’s. No worries, they’ll catch up.

We’re keeping an eye on the kitten-cam as Lily is still trying to figure out how to corral the kittens for nursing. Sometimes they will end up behind her or wander off.

Despite being terribly tired, we can’t complain. Seven healthy kittens and no trips to the vet.

Permanent link to this article: http://atlastcats.com/seven-for-lily-in-the-wee-hours/