Some time in the sun 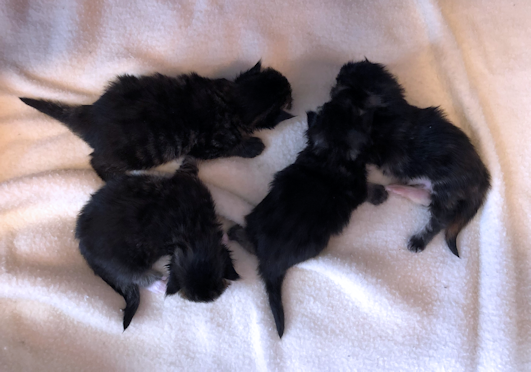 Pixel started to give birth on Wednesday, April 28th while I (Chris) was grocery shopping. We were expecting eight kittens and by the time I got home four had already come out. The remaining four came out about one every 25 minutes.  All seemed well. Pixel was very protective and seemed a little stressed, but that’s not unusual, especially with a big litter.

The next day, one of them seemed to be having trouble and Pixel was not attending to her – never a good sign. We started the baby on antibiotics but to no avail. Late Thursday afternoon we found another one dead and we started all of them on meds.

By Friday morning we’d lost three in total and one was fading.  That one had passed by the time we got into the vet. Half of the litter gone. The remaining kittens seemed perfectly fine, at least. Our vet could find nothing wrong. She supposed it could have been a bacterial or viral infection, but didn’t think it was worth sending a body to the State lab.

Pixel has had big litters before without a problem, and with the same dad (Max) so we’re at a loss to explain it. We’re trying to think of what was different about the four that passed from the four that survived, because at at birth they all seemed similarly robust. Maybe a difference between the ones where we tied off the umbilical versus Pixel biting it off, but we didn’t think to keep records of that so we don’t know if there is a correlation. We were thrilled to see such a big litter so it is hard to accept losing half of it.

Anyway, the four kittens that remain are growing like crazy and are very good eaters! Pixel immediately moved them from the birthing nest to the corner, so we set up a fleece and a heating pad there and let her be.  A bit more than a week later the kittens are getting a little mobile so we moved them to a big nest and she seems pretty content with the situation. 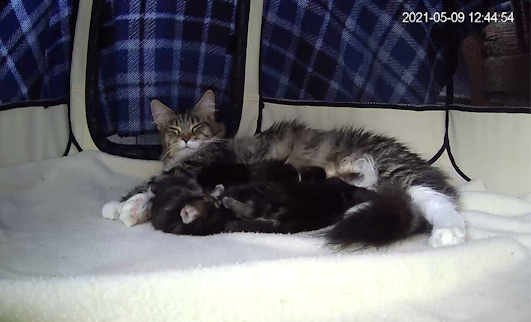 Happy mama on the kitten cam!

We think there are three boys and a girl (but don’t hold us to that). Since they arrived while I was getting groceries we think we will name them Hannaford, Wayno, Kroger, and Piggly Wiggly.

Permanent link to this article: http://atlastcats.com/supermarket-sweep/