Sitting for their portraits

Nums in your tums

Tales from beneath the radio cabinet 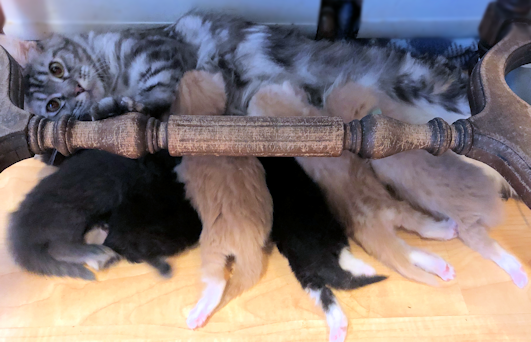 Two weeks on Lily’s kittens are doing well, but she’s making us work for it!

Next we thought, “Well, if she insist on being there, let’s put the cabinet inside a big nest so at least the kittens aren’t right on the floor.” We kept putting fleece under her but she would push it away.  We constructed a big cardboard nest with low sides and lifted the radio cabinet into it. Of course, she had no interest in going inside, even though her kittens were there.

What Lily wants, Lily gets. She just wants to be right on the floor, under the radio cabinet. So all we can do is keep the heating pad there, keep the room warm, and check on them often. Maybe we’ll re-arrange things for future litters so that the radio cabinet isn’t in that room anymore. The nest or nothing!

Meanwhile the kittens were growing, but not as fast as they should, and a couple were lagging behind the others. We checked Lily’s teats and everything was functioning, so we surmised that she wasn’t producing quite enough milk for everyone and the smaller ones were getting pushed out of the way. We began feeding the kittens formula four times a day to supplement and it now they are growing well! The smaller ones are not as interested in the formula as the larger ones, but they still seem to be benefiting. Maybe they’re getting more nipple time because the larger ones are satisfied.

Whatever the reason, it seems to be working so we’ll probably keep it up until they are eating solid food.

Permanent link to this article: http://atlastcats.com/tales-from-beneath-the-radio-cabinet/