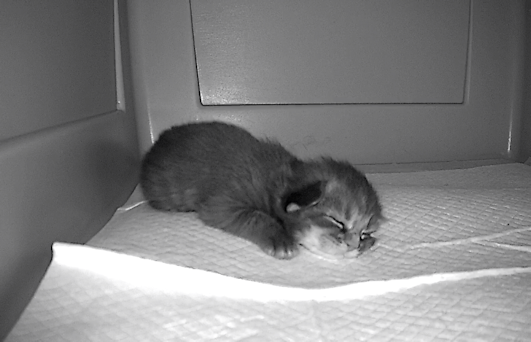 Butterball is getting plump! The magic of night vision.

Butterball is growing quickly after some concerns that he wasn’t growing fast enough at first. He wasn’t interested in formula but he’s been gaining weight  steadily for more than a week, so no worries.

Part of our concern came from using the Kitten Cams in the nest and kitten room. We originally got them to keep an eye on Lily and her kittens as she moved them around the room. She would get up to greet us every time we walked in, so the camera was useful for checking that the kittens were safe and warm without interrupting their nursing. It has proven useful since then in checking in on mothers who are about to give birth.

After Butterball was born and  we watched the camera in Sara’s nest we (okay, I) became worried that she wasn’t spending enough time with her baby. It seemed that every other time I checked the cameras he would be alone and Sara would be just outside the nest or on the other side of the room. I wondered why she wasn’t with her kitten constantly except to eat and use the litter box.

In the end we realized that before the cameras we weren’t with the mothers 24/7 (we’d just check on them every hour or two or when we woke up at night), so we had nothing to which we could compare this experience. We had no idea exactly how much time other mothers were spending in or out of the nest relative to Sara. Also, with a singleton there just wasn’t as much nursing going on so she probably didn’t need to be there all the time. Other mothers with more babies were probably in the nest more because all of the kittens weren’t nursing at once, or the kittens were tag-teaming her teats.

So, all in all, we were probably worrying too much about nothing. Certainly, it’s better to be safe than sorry, but the next time we use the cameras I’ll try to be a little less obsessive.

This kitten is reserved.

Permanent link to this article: http://atlastcats.com/too-much-information/