Whenever a kitten goes to their new home Marie always says, “Send us pictures! We love pictures!”

Well, we were ecstatic when  we heard from Tracey and John Schlotter, who got two boys from our second litter (the “Coffee Litter”) twelve years ago! They say that the boys are happy and healthy.  These gentlemen look so magnificent that we asked Tracey and John if we could share their pictures, and they agreed! 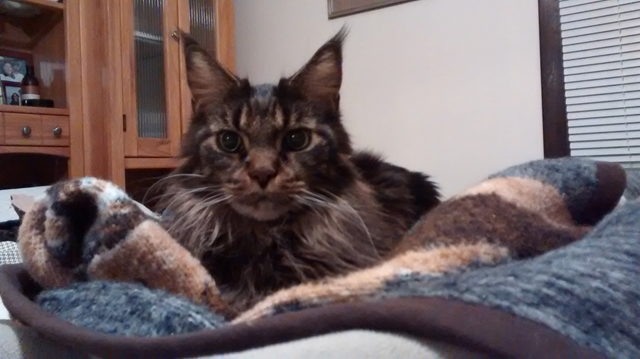 Permanent link to this article: http://atlastcats.com/twelve-years-later/

At the cat show

Maximus (Max) and Frida had a good time at the cat show in Natick, MA this weekend! Frida made two finals and probably earned her Champion title. We’ll know for sure when we count of the points.  She’s still a little shy with the judges but as she’s getting used to the whole process.

Max is seven  months old and so was shown as a kitten at this show. He makes for an enormous kitten! Max didn’t make any finals but he’s learning how to interact with the judges. He’s also a real crowd pleaser (not that it counts for anything with the judges). Every time he was on the judging bench there were audible “ooohs” and “aaaahs” from the audience because of his size and color. 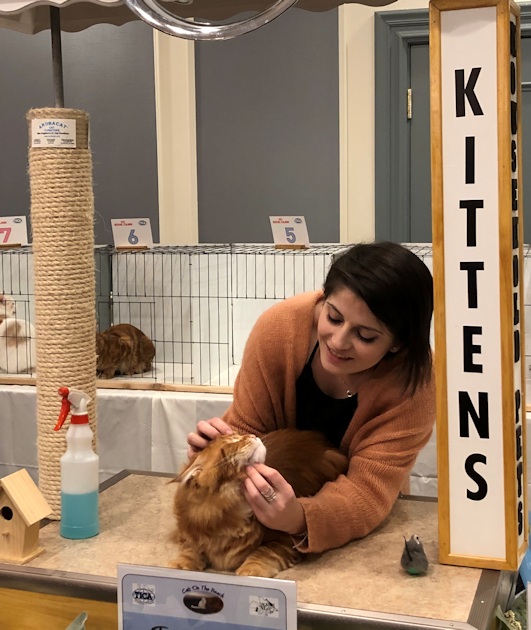 Can you believe Max in the kitten class? 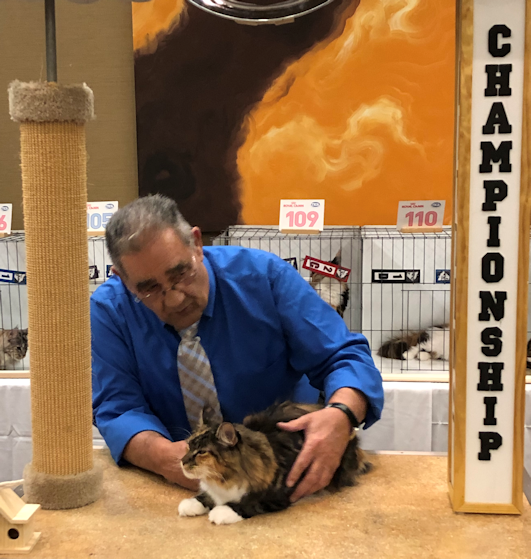 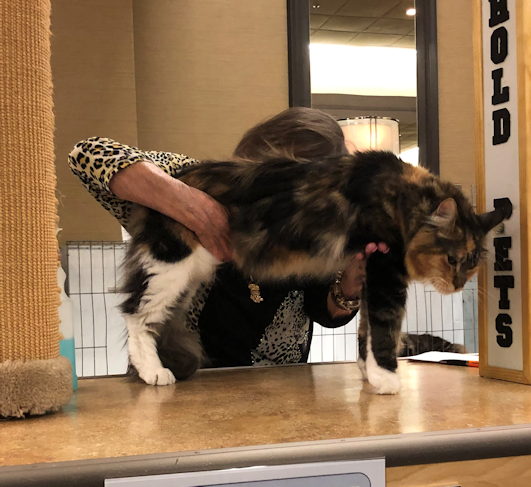 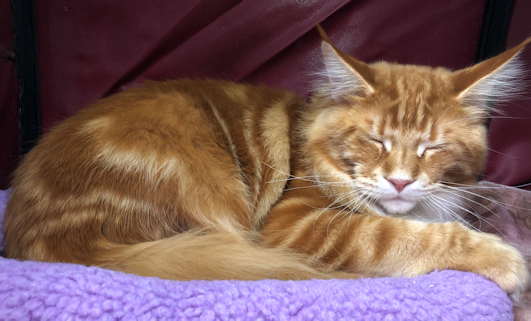 Permanent link to this article: http://atlastcats.com/at-the-cat-show/

Might as well face it, he’s addicted to laps

Update: Buddy Holly has been reserved!

The person who reserved Buddy Holly asked if they could wait for a kitten from a litter next year because of new medical issues with their current pet. It just wasn’t the right time to take on a new fur baby.

While we have absolutely loved having Buddy around (see below) he really does need to go to his forever home. Like most kittens he is energetic and playful, but he is also outgoing and very, very cuddly. Maine Coons aren’t always lap cats but this boy may be addicted to laps. 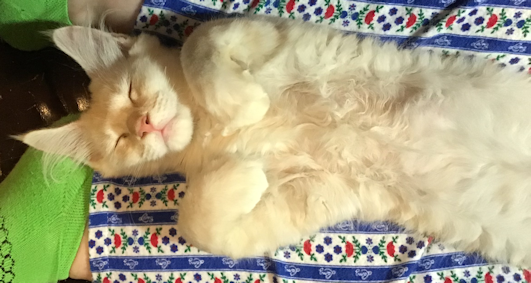 Permanent link to this article: http://atlastcats.com/might-as-well-face-it-hes-addicted-to-laps/

Come and knock on our door…

Update: Chrissy decided that he’s a boy! We’re very supportive of his gender choice, whatever it may be. Okay, we might have mis-identified his gender a few weeks ago, but in our defense his testicles haven’t descended yet so it’s easy to get it wrong!

Lola’s kittens are getting bigger every day! One week they were crawling with their front legs. A week later they were running around the room. Now they’re jumping on the chair. It’s the usual progression but it’s fun to see.

Jack is particularly feisty, chasing after our feet and attacking our toes. He definitely wants to be an alpha male!

As for the theme for this litter, we decided that one with a guy and two girls would make the most sense, so… Three’s Company it is!

Permanent link to this article: http://atlastcats.com/come-and-knock-on-our-door/ 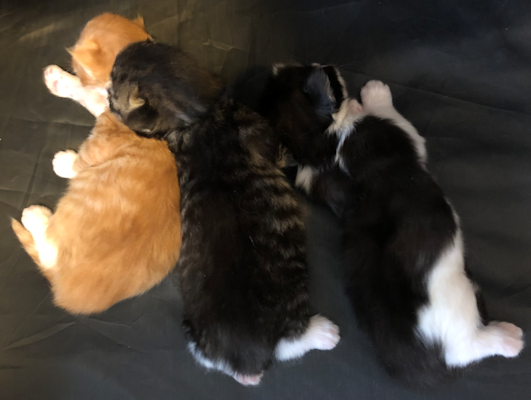 Meanwhile in the room just off the bedroom (which we call the Kitten Room) Lola’s kids are getting big and chunky. Lola is eating a lot and it looks like it’s all going directly into the kittens! At only a week old all they do is nurse, sleep, and grow, but boy are they growing!

Permanent link to this article: http://atlastcats.com/chunkers/ 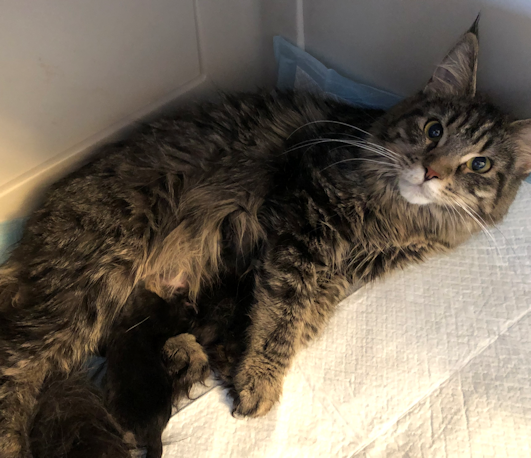 It’s hard to see here but they’re nursing like crazy.

Update 1/20/19: Well, we finally  got the results back from the New Hampshire Lab  (they were really backed up over the holidays).  The kittens died from sepsis resulting from an infection. The lab’s theory is that Tribble’s uterus opened early, allowing something in and they were infected in the womb.

The good news is that means Tribble is still okay for breeding. We can also start giving our mamas antibiotics starting ten days before delivery in order to mitigate something like this in the future. We aren’t in love with the idea of medicating a mother unless it’s necessary, but we’re even less in love with losing kittens this way again.

Update 11/17/18: None of Tribble’s kittens have survived. Two  more died the next day, but one held on for another week.  The last kitten did not make much progress despite supplemental feedings.

We’re awaiting the results of a necropsy on one of the kittens from the New Hampshire Veterinary Diagnostic Lab before we make any decisions on Tribble’s status as mother of future litters. We had already decided to retire Diggy to make space for Max when he is an adult.

Tribble gave birth to seven kittens this weekend. Unfortunately only three have survived. The three kittens are very good eaters and are very mobile. Tribble is being a very attentive first-time mama and will even hold off on eating a bowl of fresh food if the little ones are nursing.

That said, this was probably the hardest and most stressful delivery we’ve had in over ten years of breeding.  Tribble gave birth to her first kitten late Saturday morning and her second one an hour later. That’s a little slow for us, but not unheard of.  Four hours  later we still hadn’t seen a third kitten (even after a shot of Oxytocin) so off to the vet we went. The x-rays confirmed that everything looked fine and another kitten was on the way. The third one came out at the vet and it looked like smooth sailing from there.

A fourth kitten arrived a few hours later, but there was no activity the rest of the night.  At this point we were only a little concerned because it was obvious that Tribble is a girl who takes her time delivering. In fact, other breeders have told us stories of girls who took two days to deliver their litters.  We set regular alarms through the night so we could check on Tribble’s progress and tried to sleep.

Finally, a little after 6:00AM out came three kittens in quick succession. Two were stillborn and the last one (a surprise, we were only expecting six) was small but lively.

We thought that was the end of it. Five kittens! But over the course of the morning two of the kittens that were born earlier died.

The remaining three kittens (including the smallest) are doing great and we’re obviously keeping an even closer eye than usual on their progress.

We don’t know how other catteries handle communicating about these things. We’ve always felt it was important to be up front about how this works, and sometimes that means talking about bad news. Things like this happen no matter how many heart tests and genetic tests we do, especially with a boy and girl who haven’t been together before: You just don’t know what’s going to happen. Obviously we hope that these three kittens will grow up to be big and beautiful, but this isn’t a breeding we plan to repeat.

Permanent link to this article: http://atlastcats.com/first-delivery/

Lola gave birth to three beautiful kittens starting around 3:00AM this morning.  This was Lola’s first litter and it went very smoothly. As with many of our mothers she is very protective so we’re taking care not to disturb her too much lest she decide to move the litter out of the nest and under the bed.

That said, this litter was a bit more than two days later than expected.  We appreciate the hard work Lola has done with gestation and delivery but once she has settled into motherhood we will have a serious conversation with her about punctuality.  I’m sure that she she will take constructive criticism to heart. 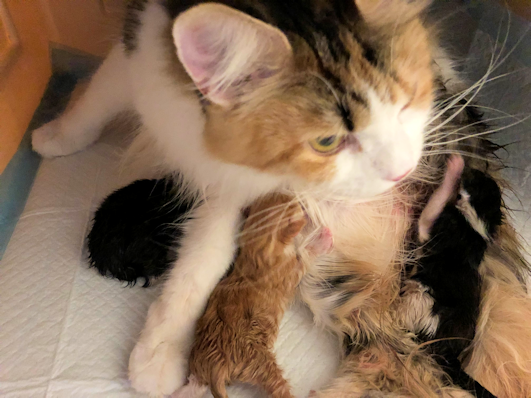 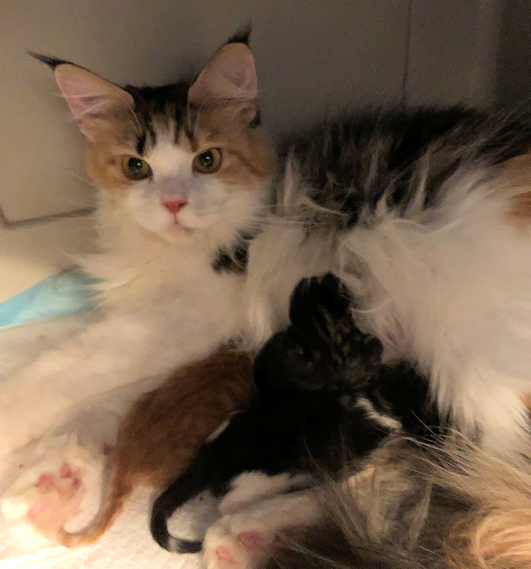 This is the “stay away from my kittens” look.

Permanent link to this article: http://atlastcats.com/early-morning-delivery/

Available girls and why you want them 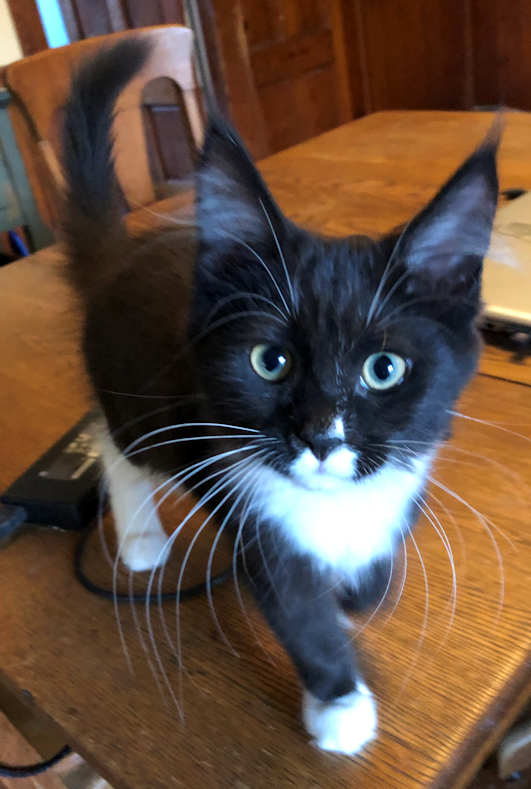 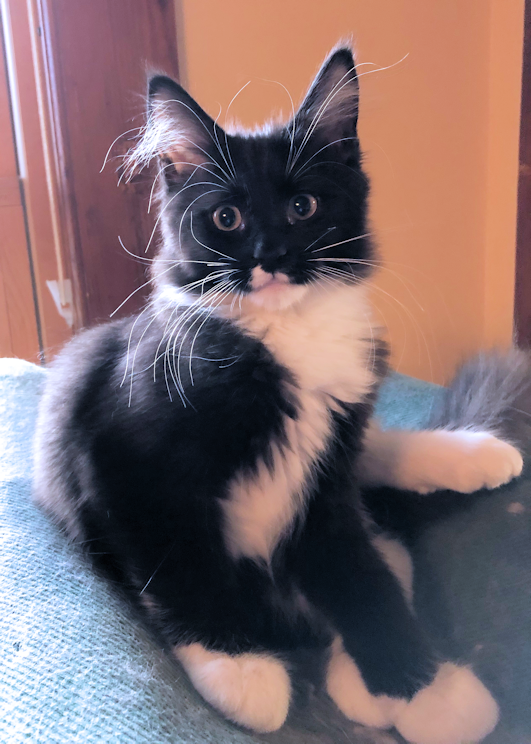 Update: Collette and Harriett have been reserved!

Collette and Harriett are fourteen weeks old as of this writing and available now! If you are interested in adopting please fill out a placement application.

People seem to prefer Maine Coon boys. Normally our litters are reserved even before they’re born, but Nikki and Buster’s all-girl litter changed things up. A few people decided to wait for a boy from a later litter.

That’s absolutely fine. People want what they want and it would be a disservice to the kitten and them if we didn’t do our best to allow for the right match. That said, this seems like a good opportunity to talk about Maine Coon girls and why one might be the right cat for you.

Permanent link to this article: http://atlastcats.com/available-girls-and-why-you-want-them/

Meanwhile, in the next uterus… 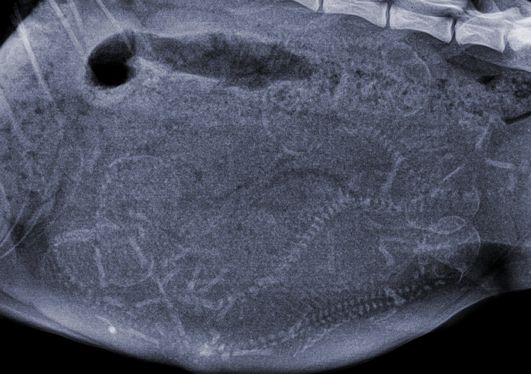 In a few weeks Tribble and Diggy will give birth two five or six kittens! Well, Diggy won’t do anything except pace around in the next room. I’m kidding. He’s oblivious.

Five of these kittens are reserved. If you are interested in a kitten please fill out a placement application.

Permanent link to this article: http://atlastcats.com/meanwhile-in-the-next-uterus/ 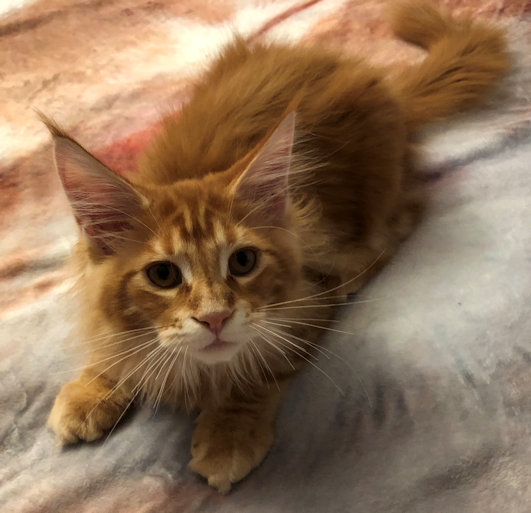 We’re far too late in publicly announcing the latest addition to our home: Maximus! Max is four months old and comes to us from Elegant Lynx Maine Coons in Connecticut. Someday he will be a proud father, but right now he is just happy to play and hit the cat show circuit.

Permanent link to this article: http://atlastcats.com/maximus/