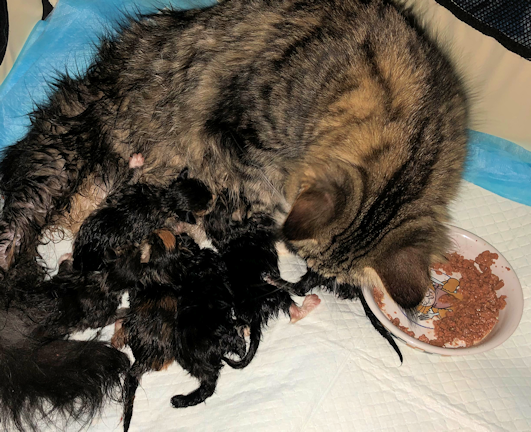 Pixel gave birth to seven kittens this morning, six of which survived. The kittens that made it are doing fine, nursing well, and are very big!

Last year we said of Pixel’s delivery that “Pixel makes it look easy.” This year she tried to prove us wrong. She was three days late when she started to go into labor around 4:00AM.  Of course, she tried to deliver under the bed. We eventually got her into a nest and we discovered that the first kitten was a breach birth. It wasn’t far enough along where we could do anything to help. After an hour we were getting ready to head to the emergency vet when the kitten popped out, and was perfectly fine.

The rest of the kittens came out at regular intervals, except for the last, which took almost two hours and was stillborn. We’ve had long intervals between kittens before and they’ve been fine (sometimes the mama takes a break) and it is always a debate whether we should administer Oxycontin or otherwise intervene. We gave her food with some added calcium but that didn’t seem to speed things up.

In retrospect it could have been much worse, and we were very worried that the breach kitten’s slow delivery would mess things up for the remaining kittens. We avoided a trip to the emergency vet, which could stress out Pixel and her babies, so that was good. It just went so well with Pixel last year that we expected this year to be a breeze.

That said, we have six healthy, hungry kittens and a happy mama!

In other news, Pixel just loves to eat the placentas, so now she has placenta breath. 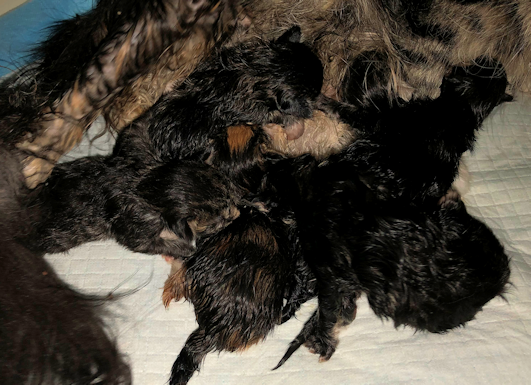 Permanent link to this article: http://atlastcats.com/pixel-makes-it-look-difficult/